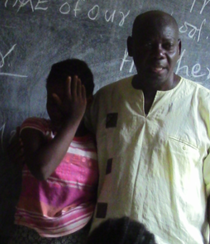 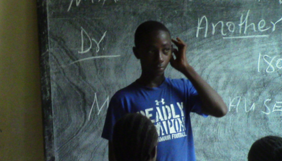 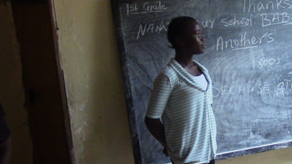 A few of our videos about Isaac's Dream:

Angeline  is 14, in 2nd grade, was not in school for the last two years, and has never ended a school year in a long time. As the photo depicts, Angeline could not hold back her tears when she briefly told her story, expressing how much she was thankful to God for BABMOC’s free school program. She said she had told her parents she did not want to go to school anymore, because she has never ended a school year before; she has always been thrown out of school in the middle of the year for lack of school fees, causing her friends to laugh at her. When her parents told her that this time she did not have to worry, because there were no registration and school fees required, she was taken over by joy and couldn’t wait to be registered. I thank God for BABMOC, she emotionally concluded.

Reubenis 15, in 3rd grade, has not been to school in three years, lost his mother early this year, and is currently living with a relative of his father in the Kpelle Town community. In a brief testimony, Reuben thanked God for the BABMOC’s School System, without which he said, his number of years out of school would have increased, because his mother, who was making efforts to ensure his return to the classroom, had passed. With BABMOC’s school, I am hopeful, more then ever before, that my dream to become a builder is now just a matter of time, Reuben said.

Patienceis 16, in 2nd grade, has not been to school for the last 4 years, and is living with her uncle in the Kpelle Town Community. In Patience’s testimony through a song, she sang, “I now have hope in the future, now that BABMOC has intervened to turn my hopeless situation into a hopeful one."  Patience has also signed up for a special class that BMSS is offering after school each day to help those who are lagging.